My dad was on his way out to the Sunday Matinee of The Wolf of Wall Street, but first he had to pick his lady friend up from church.

“Are you sure you’re comfortable seeing this movie with this woman?”  I asked my dad.  I’d seen the movie a few weeks before and was delighted by its graphic sex scenes and record-breaking profanity.  But I thought it might be uncomfortable for my dad, depending on how straitlaced his friend was.

My dad shrugged his shoulders, “No, she read in the paper that it breaks the record for using the f-word and she knows what it’s about.  But she wants to see it.”

“OK, good,” I said.  “I thought the movie was hilarious.  There were some moments of physical comedy that were kind of like slapstick, like something Mom would have enjoyed.  You’ll have to tell me what you think, but I bet Mom would have actually liked the movie despite the 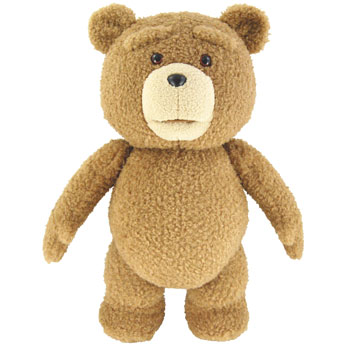 “No, I know she wasn’t a prude.  She liked Ted, right?”  I remembered my mom had seen that movie shortly before she died and she thought it was hilarious.

“What?”  My dad looked at me incredulously.

“She liked Ted, right?”  I repeated for my dad.

“What?!” My dad looked totally confused.

I said it again, very slowly this time, “She liked Ted, the movie, Ted!  Didn’t she?”

I shuttered at the thought, “No!!  NO!!  TED!!  THE MOVIE, TED!!  NOT head!  I did not say that!”  I plugged my ears and squinted my eyes in an effort to prevent any visuals from popping into my mind.  It was futile.

My dad was laughing, “I couldn’t believe you’d say that, but I was like, well, it is Mary!”

“No!  Please don’t say anything else on this topic, Dad!”  I curled up into a ball on the couch.

In therapy I talked about living at my dad’s house. I told my therapist that I’m grateful to be here; my kids are safe and comfortable, Chris is happy as a clam, and my dad goes out of his way to give us privacy.  But I’m homesick.  I said that it will be nice when our house is safe and livable again. It will be good to return to our normal lives.

“You might be surprised,” she warned me.  “In some ways, you may be sad when you have to move out of your dad’s house.”

I smiled.  “I guess, maybe,” I said, just to appease her, but I didn’t really entertain the thought.

When I was a kid my dad had a lot of running jokes.  Whenever my sisters or I had a friend over for dinner my dad would try to collect money from them to pay for their meal.  The friend never got the joke and it was always very awkward.  Then, when dinner began, my dad would put his hands together and bow his head.

The friend would inevitably follow his direction and put their hands together to pray.  Then my dad would burst out laughing.

“Just kidding!  We don’t ever say grace!”  We’d all be laughing at the friend by that point.  But my dad followed up with his own version of grace.

My dad takes me out on a dinner date once a month.  He lets me choose wherever I want to go.  We usually sit and continue to talk for a while after our meal.  Our conversations are invaluable to me.  My dad tells me lots of things I never knew about how he was thinking and feeling when I was a child.  Sometimes he repeats himself. I can tell he really wants me to know certain things.
He tells me that when he thinks about his life with my mom, he doesn’t yearn for the more recent days when she was sick.  He really misses the days when his family was young and we were all under the same roof. Back then, when he came home from work, there was always a little girl waiting to jump into his arms.
But those days were long gone anyway, he says.

Those are hard things to think about.  Especially because I’m the Queen of Waiting Till the Kids are Eighteen.  I adore my daughters and I know that when they’re grown I will miss having children in the house.  But parenting is a huge responsibility.  Sometimes I feel defeated.  Other times I feel unappreciated and I just want to run away.  When times are tough it feels like it will last forever.

It’s good to have my dad around to remind me that the kids will be grown up sooner than I think.  I’m going to miss the silly things they say, the cuddles, poop jokes, and the surprise hugs.

When I tell my dad I’m homesick he says, “Home is where your family is.”

At first it annoyed me, but I know he’s right.

On Tuesday, when he got home from work, he walked in the door and Simone squealed with delight, “Papa!  Papa’s home!”  She bounced up and down in her chair and waved excitedly, “Papa’s home!  Papa’s home!”

My dad beamed as he took off his coat.

And I thought to myself, “When we move back to our house, I’m going to miss this.”

24 thoughts on “She Liked Ted”