Her hands were just like mine. I like to wear her puffy, black, fleece mittens. I rub the fabric and picture her hands with the thick, gold wedding band on her left ring finger. I keep the mittens in her blue Honda Accord which I bought from my dad. I prefer to drink my coffee out of the over-sized, white Starbucks mug I took from her kitchen just after she died. I keep her blue and cream waffle-knit shirt in a big Ziplock bag but it doesn’t smell like her anymore.

My mom, Gwen, was born in “The Bottoms.” I’m going to say it again, but picture it in a sleazy Ron Burgundy voice, because that’s the way my

sisters and I always say it. She was born in “The Bottoms,” or the slums of Sioux City, SD. She had one brother and four sisters and on sunny days, their OCD mother locked them out of the house so she could clean in peace. My mom said she was an ornery little girl and I can see that spitfire gleam in her eyes when I look at her childhood pictures.

She was in her early twenties and unwed when she became pregnant with my big sister, Dusti. Her boyfriend abandoned her and my grandma urged her not to have the baby, but she gave birth to her first daughter on July 12, 1969. She named her Dusti after her favorite actor, Dustin Hoffman.

My dad met my mom at a Fourth of July party forty years ago. He was smitten with her beauty and called to invite her over the next day.

“I was just mowing the lawn and it’s full of bunnies. You should bring Dusti over to see them,” he suggested.

My mom took the bait. She and my big sister went over to his place. They watched the bunnies then walked down the street to the park. My mom and dad teetered on the teeter totter while Dusti played close by. My dad could see my mom’s underwear peeking out of her shorts. I wish he’d never told me that.

When they were married in November 1975, my mom wore brown pants and a matching turtleneck under a cream-colored smock that her sister sewed for the occasion. My dad gave my mom a simple, thick, gold band. As a girl, I slid my mom’s ring on and off of my small, thin fingers while she did the dishes. I dreamed about growing up and getting married, having my own family. I pictured my mom old and gray, she’d meet all her grandchildren and even some great grandchildren. I thought she’d always be around.

Together my parents raised four daughters; Dusti, Ellen, Mary, and Susan. My mom was completely devoted to her girls. She didn’t go out with friends very often, working late hours or odd jobs from our house so that she could keep us at home with her. She loved hot baths. In fact, I bathed with her until I was probably way too old to be bathing with my mother. My little sister often joined us and my dad would poke his head into the bathroom and chant, “Rub-a-dub-dub, three nerds in the tub!”

I miss my mom.

When I think of her I feel like I’m seven years old again; I may as well be on the playground at Seymour Elementary. I was always such a Mama’s Girl.

One afternoon I caused a scene at recess. My friends and I played on the jungle gym as we discussed who would ride with whom to Girl Scouts after school. Cassie would ride with Jamie. Kerry and Molly always drove together. I wanted to ride with Lindsey but she had paired up with Michelle and they claimed there wasn’t room for me. Mid-argument I saw my mom’s station wagon at the top of the hill, just passing by. I wanted to chase her down and go with her but she was too far away. Instead, I burst into tears.

“OK, OK,” Lindsey backtracked, “You can ride with us!”

I turned around and ran back to the school, crying for my mom all the way. 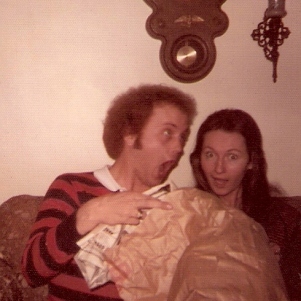 My mom was my first love. When she held my hand she’d squeeze it in random pulses to tell me that she loved me back. When I was scared at night, she rarely turned me away. I’d crawl into her bed and she would wrap her warm legs around my own. When I was bullied in high school, my mom sat on my bed and cried with me.

My mom was always worried about us. Once she lectured us about making faces at other drivers on the road.

“You never know if the person driving in the next car has a gun or a knife,” we all started to laugh about the knife threat.

“How are they gonna stab us if they are in another car, Mom?” We giggled and she glared, irritated by our logical response.

Dusti made my mom a grandma when she had her first daughter, Tabitha. Tabbi called my mom “Manga,” and the nickname stuck. Manga worshipped her first granddaughter and every granddaughter born after that—Kendall, Layla, Piper, and finally, Simone. I got mad at my mom for ignoring me every time there was a grand baby in the room. Sometimes she’d ask me a question, then get lost in Layla’s eyes.

“Why do you even ask the question if you can’t listen to the answer?!” I fumed at her. I’m ashamed that I actually used to get mad about those things. I took her for granted too often. But I can’t do that anymore.

It was September 27, her sixty third birthday, when the doctors said, for the fourth time, that she had cancer. The pancreatic cancer was stage 4.

After that, I took my kids over to see my mom as often as possible. I mothered her to the best of my abilities. My mom loved fried eggs so I perfected my technique, seldom breaking a yolk. By November I had mastered our new routine. We were cozy in the house I grew up in. My mom would drag all the toys out of the cupboard for Simone and they’d sit together on the brown shag rug while I cleaned the breakfast dishes.

I could have stayed like that forever. But she was in so much pain, I have to remind myself of that fact to keep from idealizing the time period. It was torture to see her suffer. She said she would live for another eleven years and she was so determined. But some days her back hurt so badly that she couldn’t get out of bed. I’d go home at night and cry while I googled the words “fuck cancer.” It couldn’t last forever—I wouldn’t have wanted it to.

It didn’t last forever. One year ago this week my mom got so sick that she had to go into the hospital. She was unconscious for more than a day when the doctors told us she needed a breathing tube. They said we wouldn’t want to be there while it was administered so we left her bedside.

I held my breath the entire time I sat in the waiting room—I know that’s not possible but that’s how I remember it. It seemed like it took forever to get the tube in and when I got back to the room I realized I had accidentally left my phone on the table next to the bed. It had been turned off and there was a piece of a plastic tube lying on top of it. I put the piece of plastic in my pocket.

She slept for three days in the hospital. All of her girls and my dad stayed by her side. I held her hands and looked at them over and over. I squeezed them in random pulses and cried into them. I couldn’t believe I was holding them for the last time. I sang to her, “You are My Sunshine,” and “Your Song.”

Living an entire year without her has been surreal. The first time I went back to her house was awful. I couldn’t help but stare at the vacant breakfast table. The empty bed still covered in her hair. Pairs of her bifocals scattered throughout the house. December 22, on Simone’s first birthday, we hosted her funeral.

This year my family has celebrated birthdays and holidays together and it isn’t the same without Manga’s sweet smile. But I am hopeful. Simone’s birthday last year was decidedly dark and depressing. By March it was Piper’s seventh birthday. Sad but tolerable. Kendall’s birthday in July was nice. Layla’s birthday in August was downright celebratory. And I’m actually looking forward to Tabbi’s birthday on Saturday.

Sometimes I take out all the things I saved and look at them. Her shirt, a scarf she was going to give me for Christmas, the parts to a music box I was making her, a little piece of her breathing tube. I browse through all the old pictures.

There’s a shot of her sitting on the rug in that denim shirt, looking at the camera. I want to reach out and grab her. And in her wedding picture she looks just like Kendall. There’s a photograph of her beside a friend in a car, she’s laughing hard and she has those crazy eyes just like me. It makes me feel happy in the saddest way. She was the best mom ever. I cried for her many times as a little girl and I will cry for her for the rest of my life.

I just miss my mom. But I promise to live a life that would make her smile. When something’s funny I will laugh so hard I cackle, just like she did. I will be good to my family, keep a warm and love-filled home. When I hold my daughters’ hands, I will give them a squeeze to say, ‘I love you,’ and every time I do, I’ll think about my beautiful mom. Whenever I miss her all I have to do is look down at my own hands. They are just like hers.

Click on the photo, below, to view a video tribute to my mother. Video made by Shannon Baker http://www.key2organizing.com, http://myroad2santafe.blogspot.com/