My husband predicted it all coming on. I am lazy about keeping track of my period and it always seems like I just had it yesterday. So last Thursday evening, when Chris and I were talking privately, he complained that I was acting really irritable. Then he implied that my sour mood was being caused by PMS and I got so mad that I wanted to lift him up and spin him in circles over my head like the Incredible Hulk. That was probably a good clue that I was actually having PMS but I ignored it.
“Are you kidding me? I just had my period like two weeks ago! I am fine! You are just being really irritating today!”
He gave me a look that said, “Yup, that decides it, you’re having PMS.” 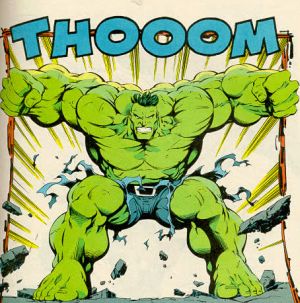 His insistence enraged me, “Chris, you know what?! Don’t even do this! Even if I had PMS, which I DON’T, that would be a horrible idea, on your part, to even imply that I’m PMS-ing. It doesn’t calm me down, it doesn’t make me feel any nicer toward you! Will you ever learn?!
“Oh, and by the way, a woman told me yesterday that I looked too young to be married.  Don’t you think that should be grounds for divorce?”  My joke tanked.
The next morning I sheepishly hid my tampon waste at the bottom of the bathroom trash can and decided not to tell Chris that he was correct about the timing of my period.  The next few days were hard for me and my family. My kids witnessed too much of my crappy, impatient attitude.
And seriously, poor Chris. Sure, he’s annoying, but when I get bad PMS he has a target on his forehead.  There’s just this angry feeling inside of me.  It reminds me of the feeling I had last summer when I got a really bad Poison Ivy rash and had to take steroids to get rid of it.  I walked around the house saying, “José Canseco ain’t got shit on me, ese!”  And José really doesn’t have shit on me when I have PMS, either.
On Monday morning, the hormonal fog had lifted and I called Chris at work just to tell him I love him. “I’m so proud to be your wife,” I told him through tears.  What a difference a day makes.
“Oh, thanks babe, thanks.. that’s so nice. I’m… I’m happy, too…. But I’m in the bathroom stall at work right now,” he said.
“OK babe, I understand. Don’t want to embarrass you in front of your boys. Have a great day.”

6 thoughts on “The Hormonal Fog”